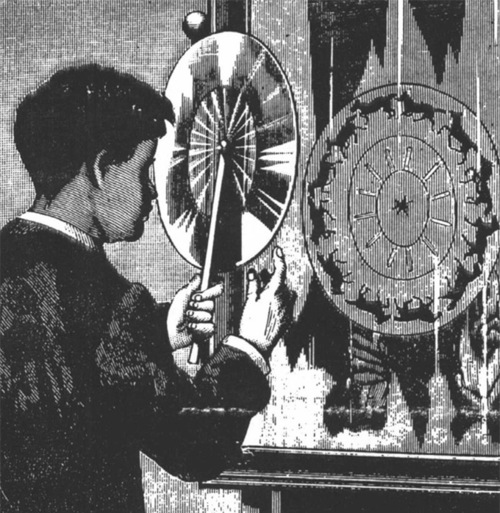 Nearly 155 years before CompuServe debuted the first animated gif in 1987, Belgian physicist Joseph Plateau unveiled an invention called the Phenakistoscope, a device that is largely considered to be the first mechanism for true animation. The simple gadget relied on the persistence of vision principle to display the illusion of images in motion.

You have to click to see all these in motion! 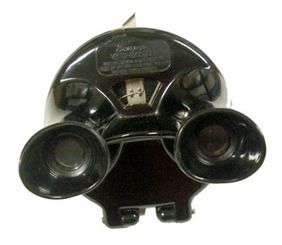 The following is a list of viewers produced from 1938 to 1996 and the “known” variations. Since many items are continually being “discovered” for the first time, any updates by our readers would be greatly appreciated. We are only listing production viewers.

A great timeline of View-Master viewers

We’re here working at Exit 55 Antiques in Fergus Falls, MN, and one of the fun parts of working our required day each month is seeing what other new, interesting things have come in from other dealers since the last time we’ve worked. This time, being the camera fan that I am, I immediately gravitated towards this old movie projector that another dealer was selling for $89.

It’s older than most of the other cameras, movie or otherwise, that I’ve ever owned. This fine example of early film projection technology is a Keystone Moviegraph:

My first assumption was, “oh, like the movie studio!”    It could make sense — if you’re making Charlie Chaplin movies, people have to watch them somehow, so why not sell the projectors, too?   Edison and Victrola made big bucks being the single source for both the equipment and the media, so why not Keystone Film Company?

Unfortunately, my guess was incorrect.    People might have watched Keystone Kops on this projector, but it wasn’t because both parts were made by the same company.

Keystone Manufacturing Company was a toy company based out of Boston, Massachusetts,  thousands of miles away from the Keystone movie studios.   This projector was designed to occupy the kids for ten to fifteen minutes at a time, each one taking turns cranking the projector at the right speed.

You’ll note that the ad says it includes just an electric cord — “for connecting to any lamp socket your electric bulb will fit”.   The interior of the projector is a big open space, to stick a lamp inside.

At least they put vents in it, just in case too much heat built up.    But, what could be safer than lettings kids play with an electric lamp, inside a metal box, running flammable nitrate film through a projector by hand?   The 1910s were a different time; this tinderbox was probably the safest thing the kids had to play with.

This neat little aspect of the history of movie theatres was also included in some kits, along with tickets and other accoutrements of the theater world.   Keystone offered a pin to identify yourself as a licensed Moviegraph projectionist.

In the past — and in some places still today — only properly licensed people are allowed to run movie projectors.   Sadly, the several thousand people who carried Moviegraph License No. 79984 were sad to find out their licensing was not transferable to other systems.

As a nerd, of course, I have appreciate the mechanism the camera uses to move the film, a single frame at a time.   I’ve taken a number of projectors apart over the years, and all of them have a different and unique way to advance the film.   This projector uses the most basic gearing system — the geneva drive:

Originally designed for clockmaking, the early film industry grabbed on to it as a technical solution to stopping the film for the split second that the shutter is open, without having to stop the motor from turning:

Despite the high-tech gearing, this projector is missing something I mentioned earlier: there’s no shutter in it. Watching a movie projected by this Keystone projector would be pretty blurry, despite the momentary gear. Well, what can you expect from a toy?

I did speak a bit too soon:  Keystone Manufacturing might not have been the same company as the Keystone movie studio in California, but they did sell film.  Although the projector would work with any silent 35mm movie film, Keystone Manufacturing sold their own reels for the projector-owner’s entertainment.  Most of their Moviegraph reels were lower-quality duplicates of shorts and small portions of full-length features.  So, although they didn’t make movies, they still held on to a large part of the film distribution process as their business model.

My parents will correct me if I’m wrong, but I didn’t have a doll house when I was little.

At my grandma’s house, there was my aunt’s old metal dollhouse… And I had Barbie houses and the like. But I never had a real dollhouse, a real miniature world of my own… Until now.

At an recent auction, there were a number of vintage and antique toys, including two vintage paper dollhouses. I was fascinated because, frankly, I’d never seen a paper doll house.

But I figured both old dollhouses would go for more than I had to spend in total that day, and so the auction viewing was as close as I would get.

However, when the first vintage dollhouse (the one made of pressed paper board, shown on the left in the photo) went cheap, I was hopeful — and managed to win the other!

While I don’t have any dolls or furnishings for my new-to-me old toy, I now had the opportunity to learn more about the history of paper dollhouses.

As you can see, my vintage dollhouse is made of paper — a thick paper, thicker than the usual business card, but thinner than the standard cardboard; as opposed to the thicker pressed paper or fiberboard of the larger house at the auction.

Neither dollhouse had any obvious marking for maker, etc., and as I’m reluctant to handle such fragile things (especially when I can’t imagine I’ll be able to bid on them), I didn’t dare hoist them in the air for a closer inspection.  (And so I know nothing about the larger house.)  But when I got mine home…

Well, closer inspection brought no further help in terms of maker; so it was research time.

Now that I knew the name of the manufacturer of the vintage chromolithographed cardboard dollhouse, I could really find out more.

name belongs to Warren Paper Products Company, a company founded in 1921 by Donald M. Warren as a manufacturer of paper boxes for makers of candy, apparel, jewelry, and other items.

By the 1930s, The Great Depression meant the need for cheap toys in the United States and Canada. Not only did paper mean a less expensive toy, but toys made by North American companies would be cheaper than toys shipped from Germany. This created a demand for toys that Warren Paper Products

and other companies were happy to fill.

The advances made in color printing in the late 19th century, meant that elaborate architectural details could be depicted on flat surfaces. According to Gunn Historical Musem, “This offered an ideal medium for toy villages. Individual buildings were printed on heavy paper or cardboard that could then be compactly folded for shipping, then assembled by a child.”

As you can see from my vintage paper dollhouse, and the following photos of another vintage Built-Rite dollhouse (sold as a “toy house play set”), assembly was a simply a matter of unfolding the structure, popping out pieces along their perforated edges (mine even has several types of bushes, a cat and a dog!), placing the tabs into the slots, and setting the house up on the bottom of the box it came in.

Warren Paper Products was the leader in this market, presumably, at least in part, due to its patented in 1932. But there were competitors, such as Andrews, Durrel Co., Gables House & Carton Co., Grimm & Leeds Co., Jayline Toys Inc., Marx Toys, McLoughlin Brothers, Sutherland Paper Company, Transogram, and Wayne Paper Products.

By the time World War II began, disrupting the flow of toys from Germany, plastics was becoming the word — but toys made of paper, and toys made of wood, cloth, etc., jazzed-up with colorful printed papers, were still very popular too.

Not only did the demand for paper dollhouses increase, but during the 1940s and 1950s Warren Paper Products began manufacturing paper towns, forts, farms, airports, bridges, trees for toy trains as well as forts, railroads stations, farms and airports

Many of these paper dollhouses by Warren Paper were built as replicas of actual homes and they were marketed though Life Magazine and Time/Life, Inc. as a selling tool for the magazine’s house plans after the war (to house the baby boom). Which rather inspires a whole other bit of investigation.

And here I thought I’d just have to invest in some vintage dolls and dollhouse furniture, etc.; turns out, I’m right back to my vintage magazines again!

All images are my own (and may be used if properly credited), except for the vintage ad, which was via Jennifer McKendry’s antique dollhouse site, and the Vintage Built-Rite Toy House Play Set No 34 photos are via Nine Caroline Antiques.

The rocking horse I remember from when we were kids was not the typical vintage, wooden horse. Ours was plastic, set on a frame with four big springs holding it to the frame and giving it all the bounce it needed. I can remember the sound the springs made as it bounced and rocked back and forth and side to side, once you really got going.

I didn’t find anyone collecting that plastic rocking horse. Maybe there is a line between what is vintage and what is antique and some things (like rocking horses) don’t become valued until they are old enough to be antiques. Kind of a shame. Now that I’ve got thinking about the rocking horse I miss the sound of those squeaking springs as they stretched back and forth. Then the hollow sound the plastic horse made when the littler kids were on it, their legs flopping around while we kept them from flying off.

Rockimals: History of the Rocking Horse

Lexi’s Rocking Horses: Personal blog from a restorer and collector. No recent updates.

The Guild of Rocking Horse Makers

A very modern rocking horse from the Boing Boing site.