The first-ever Auction at Elvis’ Graceland is taking place August 14, at 7:00 p.m. at the Graceland Archive Studio — and online.

While none of the 72 items are from the official Graceland collection (the collection, Graceland Archives, etc. continue to be owned by Lisa Marie Presley and are not for sale), there are some very cool items.

This auction includes Elvis’ own copy of the original movie script for Love Me Tender. Love Me Tender (with Debra Paget and Richard Egan) was Elvis’ first movie. Originally, the role was a small one; but the part was revised to accommodate the King of Rock ‘n’ Roll’s rabid fan base.

Speaking of kings… This 18-karat gold lion’s head (with two emerald eyes, a ruby mouth, and diamond eyebrows whiskers) was designed specifically for Elvis. It is one of those pendant-brooch jewelry pieces. Elvis wore it as a pendant for his meeting with President Nixon, among other places.

And what king doesn’t need a throne? This “Gold Throne” chair was used by Elvis in his dining room at Graceland. (I am more partial to this chair myself.)

Of course, when it comes to Elvis, it’s mainly about the music. So why not grab his Martin D-28 guitar?

Looking for something bigger? The 1977 burgundy and silver Cadillac Seville V8 automatic being offered was not only the last Cadillac Elvis purchased for his personal use, but the very vehicle driven by Elvis himself on the day prior to his death. 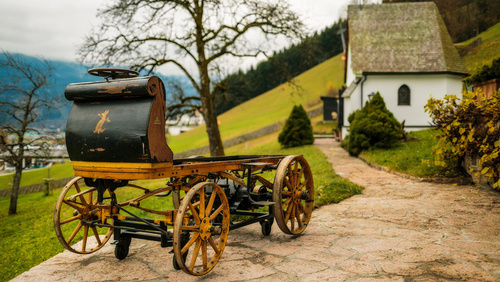 The first Porsche ever built has been untouched since 1902. Officially called the Egger-Lohner C.2 Phaeton, this electric car from 1898 has ‘P1’ engraved onto all of the key components standing for Porsche 1, done by the then 23-years old Ferdinand Porsche himself.

Last month The Milhous Collection went up for auction, with the two days of bidding on the 550 lots coming in just shy of the auction estimate of $40 million, reaching $38.3 million in sales.

The huge custom-build merry-go-round, considered the collection’s center piece, reached the estimated price range of old $1,000,000 – $1,500,000, selling for nearly $1.3 million. I think at that price, the piece deserves to be called a carousel.

While The Milhous Collection was most noted for its world-class vintage and antique instruments — ornately decorated orchestrions, theatre organs, and other mechanical musical instruments, the bids for these pieces came in lower than anticipated. Sadly, of the eight automated musical instruments with estimates of $1 million (or more), only three obtained bids of seven figures.

Lest you think the economics of space was on the minds of bidders, you should note that most of the 30 automobiles in the collection sold at or above their auction estimates. Among the high-horsepower Brass era cars, Indianapolis racing cars, and coachbuilt classics, it was the 1912 Oldsmobile Limited which fetched the highest price; as the only known surviving car of the model, it more than doubled its estimate, selling for $3.3 million.