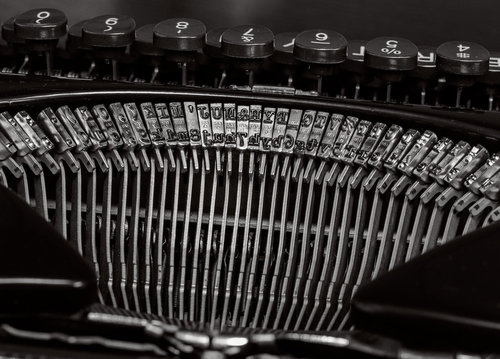 For less important doodles in text, the kind that go no farther than your desk or refrigerator door, the tactile pleasure of typing old school is incomparable to what you get from a de rigueur laptop. Computer keyboards make a mousy tappy tap tappy tap like ones you hear in a Starbucks — work may be getting done but it sounds cozy and small, like knitting needles creating a pair of socks. Everything you type on a typewriter sounds grand, the words forming in mini-explosions of SHOOK SHOOK SHOOK. A thank-you note resonates with the same heft as a literary masterpiece.

The sound of typing is one reason to own a vintage manual typewriter — alas, there are only three reasons, and none of them are ease or speed. In addition to sound, there is the sheer physical pleasure of typing; it feels just as good as it sounds, the muscles in your hands control the volume and cadence of the aural assault so that the room echoes with the staccato beat of your synapses.

At an estate sale on Friday I grabbed this book, thinking it would have some interesting recipes and tips for my vintage home ec blog. It was $5, which I’ll admit is a bit more than I typically pay for a book I know nothing about… Oddly, there was no table of contents to assist me in my evaluation, but the title was intriguing: Bull Cook and Authentic Historical Recipes and Practices

Turns out, it was a fabulous find!

(some available as modern reprints

). In fact, Bull Cook and Authentic Historical Recipes and Practices itself would later have three volumes; something I discovered via a trip later that day to a local antique mall, where all three volumes could be found (even later editions, in golden boards; each at $19.95).

While I haven’t tested any of the recipes (and there’s more than a few I will probably never ever try!), I can personally attest to the incredible array of topics covered in this vintage book.

Along with recipes for corning liquid, Norwegian Fried Ham, and Fish Tongues Scandinavian, Herter gives you the real history of the Martini, informs you which foods the Virgin Mary was fond of (creamed spinach), instructs you on how to dress a turtle and broil tiger’s feet, and tells you what you must know in case of a hydrogen bomb attack. It’s rather as the author promises right on the first page:

I will start with meats, fish, eggs, soups and sauces, sandwiches, vegetables, the art of French frying, desserts, how to dress game, how to properly sharpen a knife, how to make wines and beer, how to make French soap and also what to do in case of hydrogen or cobalt bomb attack, keeping as much in alphabetical order as possible.

But what makes this book so engaging — or, as Paul Collins calls it in The New York Times, “one of the greatest oddball masterpieces in this or any other language” — is its author. Collins describes George Leonard Herter as “a  surly sage, gun-toting Minnesotan and All-American crank” –which translates easily enough to “old coot,” a breed I am particularly fond of.

Herter was the heir to Herter’s, Inc., an outdoor sporting goods business founded in 1893 located in Waseca, Minnesota. (The company closed decades ago; but the brand lives on via Cabela’s — and hunters and sportsmen are avoid collectors of vintage Herter’s items.)

It’s not quite clear if Herter’s authorship was simply a genius marketing move, or if he just had more he was desperate to say — even after writing thousands of product descriptions and essays for the company’s catalogs, like this 1974 “How to Buy an Outdoor Knife” essay, whi to promote Herter’s Improved Bowie Knife:

An outdoor knife must be made for service–not show. Your life may depend on it. Real outdoor people realize that so-called sportsmen or outdoor knives have long been made for sale, not for use. The movies and television show their characters wearing fancy sheath knives. Knife makers advertised them and drugstore outdoorsmen bought them. [insert a picture that looks something like a Marble Woodcraft or an old Western fixed blade here] Nothing marks a man to be a tenderfoot more than these showy useless knives.

But whatever the case, savvy marketing or the need to “talk,” Herter was prolific and opinionated in his writings.

Most of Herter’s books were, at least in title, based upon the sporting goods business and the outdoorsman’s life — even with a few giant steps into the domestic world.  However, his book How To Live With A Bitch is not — I repeat NOT, about a female hunting dog. (If you cannot find a copy listed among Herter’s works at eBay, check Amazon for this elusive gem.)

So, what begins with a $5 bargain (for a hardcover copy of a 1961 third printing), leads to more fascinating fun than I can barely stand — but wait! There’s more!

I found this book on Friday morning at an estate sale, spotted the three volumes at an antique mall later that afternoon,  and then I even managed to snatch another copy (1963, sixth printing) for $6 at an auction on Saturday! This makes me very hopeful that more Herter books will fall into my hands — and I’m thrilled to do more of the collector’s kind of hunting.

A review of Bull Cook and Authentic Historical Recipes and Practices, by George Leonard Herter and Berthe E. Herter at Neglected Books.

Reminiscing about Herter’s at Topix.

Photo of George Herter, by Peter Marcus (1966) via the NY Times article by Paul Collins.

Where else can you find the best tips about caring for your vintage fashions and foundation garments then from vintage women’s publications? Then, as now, magazines shared tips for female readers interested in stretching their fashion dollars by not stretching their garments out of shape.

Inside a 1941 issue of Modern Woman Magazine, tips on how to launder your girdles:

And in another issue of that magazine, circa 19445, tips on caring for foundation garments for New Look fashions to preserve the their fit:

Often at estate sales you’ll find bags of vintage hosiery; women, especially those who learned lessons of thrift from The Great Depression and wartime conservation, didn’t throw anything away. When one stocking was laddered (had runs) but its mate was perfectly fine, a lady typically kept the mate for the day when a similar situation occurred with another pair; this was very possible as stockings were usually sold with multiple pairs per package. (And it’s practical thrift advice you can still use today!)

While stockings and hose either unworn or still in their vintage boxes can be pricey, the large bags of worn stockings can be quite cheap — and they can be of great use in recycling for the creative.

I know this can seem rather “Eeeiiiww!” to some, but the re-purposing of stockings and hosiery has a long history. During WWII nylon stockings were recycled for the war effort.

And the resurgence of the re-use of hosiery was also a huge arts & crafts recycling fad in the 70’s.

So why not grab a bag full of vintage stockings and hose and put it to good use?

First I recommend going through the bag, hand washing the stockings. As you so so, evaluate them for possible pairings, stockings in your size, stockings completely unwearable, etc.

Of those which are too damaged to wear, assess them for possible craft projects and re-purposing ideas, like nylon corsages, hanging plant holders, and even rugs.

If the stockings are in very poor shape, use them as stuffing material for sewing projects. Why buy foam pads or bags of poly-filler when you can re-use old hose?

Sometimes worn vintage stockings are just tossed away by the people running estate sales — but if you are interested in recycling vintage hosiery, let your local dealers, estate sale organizers — even local thrift shop managers — know of your interest. They may just save them for you, often letting you name your price because they would toss them otherwise.

PS If you ever get to the historic Hingham Shipyard, check out my contribution to the wartime homefront exhibit!

Many people think of aprons as charming relics from our past, or as evidence of enforced domesticity; but the truth is, aprons have a practical role in modern lives too.

Grandma always said you should be proud of your work around the house; you should be proud to take care of your home and family, and dress to show that pride. While grandma was a lady who liked to dress up, she wasn’t the June Cleaver type who wore pearls while scrubbing out the oven or baking cookies (even at holiday time). But she still believed in being properly & attractively dressed for housework.

One of the staples grandma recommended, naturally, was the apron; and she taught me a lot about them.

Sure, they can be absolutely adorable and therefore bring a smile to your face, but they are incredibly practical. Even the frilly aprons, traditionally called hostess aprons were practical; worn for show, they still offered a place for the hostess to wipe her hands while serving guests. Heck, making aprons even had the advantages of teaching and improving sewing skills. But aprons are more than practical and/or fun.

So change your apron often, wash it often, and once it’s served it’s usefulness — including as an attractive garment — stop wearing it.

As for vintage aprons, feel free to wear them — but treat them well. Many vintage handmade aprons are like works of art (at least for those who wouldn’t know how to even sew the pocket on). Avoid washing them in wash machines, or, if you must, at least on the gentle cycle; and let them hang to air dry.

While my grandma taught me a lot about aprons and the values they held, I don’t own any of her aprons… When I buy and hold vintage aprons, I like feeling that connection to my grandma and all the other women who worked to make the aprons, make the meals, make the memories — collecting them makes me feel tied to all their apron strings.