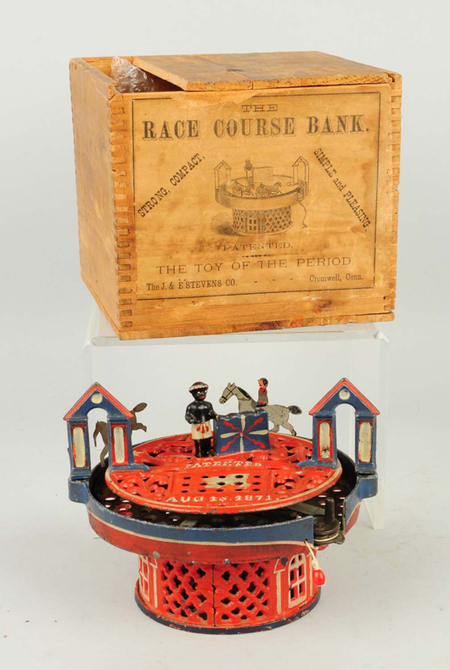 DENVER, Pa. – Toys, banks, robots and trains are always in demand at Morphy’s, and as any number of their regular bidders would attest, there’s

The box is nearly as cool as the toy!

In this vintage photo, two children play with water and a tin lithographed pail

. You can see Swee’Pea and Olive Oyl from Popeye The Sailor Man.

This is the vintage pail in color, along with some other vintage Popeye sand toys.

The photo was found in a 1956 magazine from Sweden, confirming that this was likely a European-made tin litho sand or water toy.

This is my Mother’s teddy bear. I’m not sure how old it really is. But, she wasn’t the first owner of this bear. My brother used to keep it in his bedroom when he was a boy. Currently, it’s in his house, in the spare bedroom. I saw the bear there when I visited over the Christmas holidays. It doesn’t look any different from the first time I saw it as a kid.

The bear’s arms and legs are held with a thin rope which has become loose through the body so the arms and legs both dangle around. The head is a bit loose at the neck, but it doesn’t dangle. The fabric/ textile over the body is a little thread bare looking, like an old, worn in carpet. Overall, I think the bear is in pretty good shape. The embroider on the face is still tight and hasn’t got any damage from wear and tear at all. As an experienced embroiderer, that is pretty remarkable. The bear is stuffed with something pretty dense. It has no leaks so I can’t be sure what is actually in there.

We never played with this bear. It was given the respect due it’s age (and the fact that it was Mom’s bear) and we rarely touched it. She had a few other toys leftover from her time as a child but the bear is the one my brother liked best. He had his own bear, bought for him. Also, a dog Mom made him. So he had stuffed animals to play with. That bear was always special. It didn’t get to play with the other toys but it did get to watch from it’s perch on top of the clothes dresser.