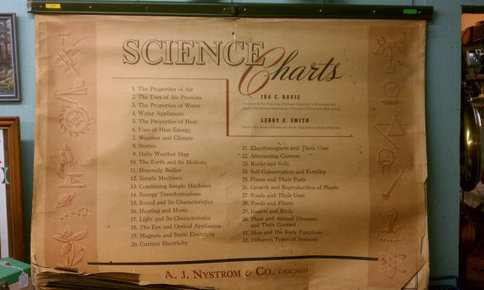 A vintage set of Science Charts by A. J. Nystrom & Company of Chicago. The 18 pages are bound in a metal mounting — like those pull-down wall

The auction we went to in South Dakota last spring had two rings, so Wifey and I split up to do our buying.   The fun part of this setup is getting to show off all the neat things we bought while the other wasn’t looking.    I bought one of these:

“Oh, a Ditto machine — remember that smell?!?” Wifey exclaimed.  She had visions of fuzzy purple-text pages becoming our regular method of correspondence with family and friends, if only for that famous post-printing chemical smell.  Unfortunately, she was close but not quite right: this is a Mimeograph, the teacher’s lounge compatriot of the Ditto machine.

The two processes are quite similar, but about as different as an inkjet printer is from a photocopier.    The Mimeograph process has the same pedigree as the light bulb and the record album.   Thomas Edison patented the process in 1876, and office technology innovator A B Dick licensed the process and developed it into a useful machine.

The Mimeograph works by producing a rather straightforward stencil — a thin sheet with letter-shaped holes in it — which is wrapped around a drum.  The drum has a fabric outer cover with an ink dispenser inside.   The ink is squeezed out through the drum and squirts out through those letter-shaped holes, similar to silkscreening.   Then, like a printing press, the rotating drum picks up a sheet of paper and impresses the ink on the page.    Thus, the Mimeograph has the capability of producing nice, crisp black printing of similar quality to an actual printing press.

Unfortunately, unlike steel letterpress letters, there’s a finite life to the stencil of a Mimeograph machine.   Constant pressing against pages wears away at the thin edges of the text, and things like the open-area in the lowercase ‘e’ and ‘a’ fall out, making solid letters.    A wide variety of methods were developed to create and duplicate stencils, so the combination of speed and quality is exactly why the Mimeograph stayed in use for well over a hundred years.  The technology lives on in the Risograph printing process, which still enjoys a certain fanbase around the world.

The Ditto machine is about 60 years younger than the venerable Mimeograph.  Patented in 1923 by Wilhelm Ritzerfeld, it pulled from an older technology called a Hectograph, which used a gelatin base to hold the ink.   Rather than a sheet of gelatin with the printing pattern set into it, Ritzerfeld’s process turned the system around with the Ditto Master sheet.   While the Mimeograph cut through the master sheet, the Ditto machine left letter-shaped gelatin marks on the back of the master, a mirror-image of the text, in a thick ink-tinted film.

The technical term for the Ditto machine is a ‘spirit duplicator’ due to the use of a combination of alcohol solvents to transfer the ink from the Ditto master to the sheet of paper.   So, when the sheets are “hot off the presses”, so to speak, there’s still enough solvent left in the paper to encourage heavy sniffing.    Because a Ditto master only held so much ink at a time, the copies became progressively blurry and lighter as the print-count increased, but the less messy and significantly cheaper Ditto system  was quite popular for schools, churches, and other budget-conscious organizations.

The Mimeograph machine I bought is in very good shape — it does need a cleaning, and the faint impression of the last document printed on it is a sign of needing the fabric pad replaced, but aside from this it is is good working order.   You can see it — and even turn the handle if you like — in the front window of Fargo’s Antiques on Broadway.