Dolls have been around nearly as long as humans have been on this earth. Small human-shaped figurines carved of mammoth ivory dating back to 28,000 and 35,000 years ago were found in Germany. And many believe dolls go back even further in our prehistory too; but, as these even older dolls were likely made of wood and fur, they have long since decayed and therefore no longer exist to be found.

Since those very early days of doll-kind, other ancient dolls have been discovered made of wood, clay, ivory, marble, stone, bone, leather, cloth, wax, and even papyrus. Not all early dolls were overly simple pieces either. In fact, jointed dolls of clay existed in ancient Egypt, and a fragment of an alabaster doll with movable arms was found in ancient Babylon. That means articulated dolls date back to thousands of years before the birth of Jesus Christ and the start of our current, Gregorian, calendar system!

While we see dolls with movable limbs as having been created to delight children, many archaeologists say that such jointed dolls were charms, created simply to make noise — noise designed to keep bad things away. Truth be told, there is a lot of debate among professionals as to whether these early prehistoric and ancient dolls were first and primarily made for religious reasons, or if they were the playthings of children.

In ancient Egypt, for example, there are many dolls found. Dolls were so popular, that there’s archaeological evidence of an ancient Egyptian doll factory!

Among the oldest, dating to 3000–2000 BC, are the flat wooden dolls with strands of hair made of sun-baked clay strung on flax thread. These ancient Egyptian dolls seem to emphasize the female form, especially the hips. The wide hips of these dolls have earned them the name “paddle dolls”. The more exaggerated female shape of these “paddle dolls” leads the experts to believe they are fertility dolls, much like the Venus of Willendorf, and not toys.

While we can thank the Egyptians and their elaborate burial rituals for preserving so many of these ancient dolls, the very fact that dolls were included in burial chambers and tombs has lead many to believe that dolls had more to do with religious ideas of death and afterlife than with the life of a child. However, since a number of dolls have survived simply due to the arid environment deftly preserving them, we have other evidence of dolls in Egypt.

When it comes ancient Egyptian dolls, clay dolls seem to have been the most common. For living along the Nile meant everyone had access to the two basic ingredients in sun-baked clay dolls: clay and the sun. Therefore, as strange as it may seem to us, wooden dolls and rag dolls made of cloth (often stuffed with papyrus as well as textile scraps) were more costly than clay and not so available for everyone. But while those dolls may have been more expensive (and, by today’s thinking, more coveted), clay dolls seem to have been very popular among children. No matter what level of society they lived in. That’s probably because the children themselves could make and “bake” their very own clay doll designs. Not unlike what many children do today with modeling clay.

When and how dolls truly became the playthings of childhood is very open to debate. In some cultures, old and new, dolls are made for use in religious ceremonies; however, once the ceremony is over, the ceremonial dolls are “retired” and given to children as playthings.

In ancient Greece and Rome, the lines between dolls for religious ritual and childhood pastime appear to have a very different trek — and an exceptionally poignant connection.

Dating back to at least 200 BC, many dolls in Greece and Rome had jointed limbs that moved, and some even had removeable clothing too. Then, as now, doll clothing was as fashionable and up-to-date as what young ladies and women of the day were wearing. (It’s difficult to imagine that such clothing would be purely for religious reasons.) We know this from the number of young girls buried with dolls. Most dolls found in the tombs of children were very simple creations made of terracotta, rags, wood, or bone. However, some of the more unique dolls, designed to look as lifelike as possible, were made of ivory or wax.

There also are the stories and images from ancient Greece which depict little girls playing with dolls. And, in fact, the ancient Greek word “kore”, which literally means “little girl”, was also applied to dolls. This takes on an even more powerful meaning when a young Greco-Roman girl came of age.

As a Greco-Roman girl approached marital age, she would dedicate her doll to a goddess. This doll dedication was a gift presentation given to the goddess in hopes of receiving the blessing of fertility during marriage. When she became a woman, she would literally put away her childish things! 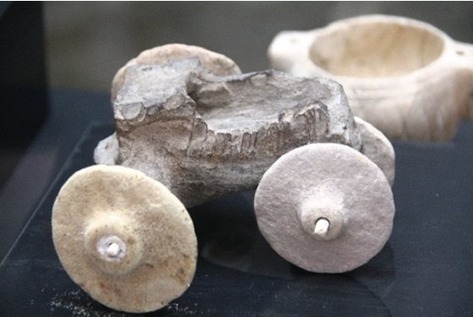 Author Cliff Dunning: “Historians tell us the oldest civilized cultures who developed the wheel are around 5,000 years old, and yet, new discoveries are continually pushing this date further back – WITHOUT our history books reflecting on the new information. Generations of people still believe that the oldest organized civilizations are those that lived in the Middle East, parts of China and groups scattered throughout the world. Before 3,000 years – we are told that man lived in caves. Here is an example of the wheel, attached to a small toy car of some type that was found to be 7,500 years old.

You might just think I’d be tired of watching and reviewing all these antique and collectible TV shows — so tired of them, in fact, that I’d be dreading yet one more. But if that’s what you were thinking, you’d be wrong; Discovery Channel’s Oddities has become a favorite “can’t miss” in terms of my television viewing.

On Oddities, we watch the on-goings of the owners (Evan Michelson and Mike Zohn) and staff (Ryan Matthew and Ersan, intern aka The Cerd) of Obscura Antiques and Oddities, a shop located on New York City’s East Village, dedicated to “the weird world of strange and extraordinary science artifacts.” Here you’ll find the more eclectic and shall we say less mainstream antiques and collectibles, such as antique medical devices, anatomical art, sideshow relic taxidermy.

Some of my personal highlights:

An ancient Egyptian mummy hand — which is notable alone for the one time in one of these shows I’ve seen the expert put on gloves. Plus, we hear from that museum professional that his coworker actually has a taste test for authenticating mummies; too bad she wasn’t around that day. But even if it is authentic, is it legal to sell? …Oh, now that’s another interesting turn.

A guy who wants a bug to scare his wife with; another man who wants the perfect creepy dental gift for his retiring dentist friend.

I’m not sure I even want a two-headed cow or four-footed chicken taxidermy piece… But if I did, I now know better how to tell if such a thing is due to an animal with an authentic genetic defect and not some fake.

And Laura Flook, embalmer turned model come fashion designer. Yup, you read that right. Flook is at Obscura looking for a mortuary table for her fashion shoots. As Ryan says, “One interesting thing about Laura is her devotion to art whether it’s a mortician, model or a clothing designer.” So devoted, yet this designer of clothing inspired by Victorian-era mourning wear is dreamily flabbergasted when she returns to Obscura in another episode to discover corsets. Admittedly, one of the medical corsets is not the normal corsetry that springs to mind; but she buys one that I’ve got in my own collection. This Flook is fascinating to me… The way she talks, everything. I hope she returns in future episodes.

Along the way there are also various circus performers (sword swallower, escape artist, etc.), theatre folk (an unusual playwright, a performer who uses blood to increase the drama), and some more mainstream celebrities (not unusual given the name dropping at the Discovery Channel’s site).

Oh, and yeah, there are the collectibles too. From horrifying medical implements to medical quackery devices, from odd little vintage toys and masks to coffins (cradle to grave, I tell you!), and other assorted (or is that a-sordid?) pieces of history.

Another great feature of this show is it’s ability to leave the shop.  It’s because of that we not only see the great lengths the staff goes to in order to procure an object for a collector, but we see the fabulously odd collections of others.  That’s something missing from most of these shows.

But with this Oddities, you definitely come for the surprises. Even if you come for the antiques and collectibles, you’ll find your intrigued by a lot more; and that’s a surprise too, right?

Because the items themselves are more dramatic, the majority of clientele themselves more interesting, there’s no need for the cast to be fraught with personality dramas, or for the show to bilk the monetary value. (Honestly, this is one area where the prices seem too low to me; the items are that, well, obscure!) So while this is part of the same genre of collectibles programming, it’s not quite the same trite formula. And it’s done absolutely right.

Oddities can be seen on Thursdays at 10:30 p.m. E/P on the Discovery Channel and also on its sister channel, the Science Channel, Wednesdays at 9 & 9:30 PM E/P. Join me in watching it — at least once!