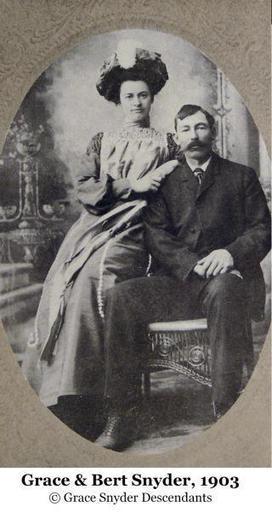 Grace Snyder’s lively eyes gaze out of her 1903 wedding photograph. There’s an astonishing hat atop her head and a tiny, cat-got-the-cream smile on her lips. She perches just behind her cowboy husband, her clasped hands resting near his left shoulder.

Her story, in many respects, mirrors Nebraska’s history in the late 19thcentury and much of the 20th century.

Born in 1882, reared in a sod house on a Custer County homestead and married to a Sandhills cowboy and rancher, she recounted her pioneer life in the 1963 book “No Time on My Hands,” as told to her daughter, author Nellie Snyder Yost.

Along the way, she became nationally known for her quilting expertise. Two of her quilts were designated as among the 100 best 20th-century quilts by Quilters Newsletter Magazine in 1999. She was named to the National Quilters Hall of Fame in 1980, two years before her death at 100.

Now Grace Snyder is the focal point of an innovative new history curriculum developed jointly by NET Learning Services, the International Quilt Study Center and Museum at the University of Nebraska-Lincoln and the Nebraska State Historical Society.

Called “Tiny Stitches, Big Life,” the online multimedia project uses Snyder’s quilts and her life experiences to bring pioneer history to life for Nebraska elementary school students. It is the first module of a larger project, “Stories of Nebraska Quilters,” with plans to develop additional material about other Nebraskans who are remembered through their quilts.